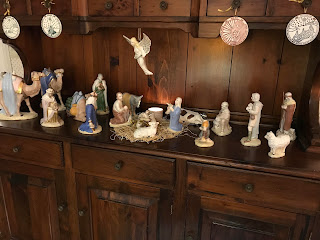 I was a bride of twenty in the mid-sixties

decorating my home creatively and economically

We sat around the table and coffee cups

talking girl talk all the while

We made rooster lamps, pitchers, and bowls

The most ambitious of us

made chess pieces and Nativity figures

I began working on my Nativity set in 1965

took a few months off after Mom died

and picked up the last pieces

How well I recall carefully cleaning

the fragile greenware with a sharp tool

till the seams were perfectly smooth

Wanting to be as authentic as possible

I applied three coats of sky blue to Mary's robe

(Did Mary actually own a blue robe?)

and ruddy brown to Joseph's

than the other figures

having been cast from a mold

that had been poured too many times

I unknowingly made the flesh tones too pale

The magi and their regal camels

were embellished with accents of pure gold

and I glued tiny rhinestones

onto their gift offerings

even though it's likely

until months after He was born

The shepherds' garments were given earth tones

and a staff was provided for one of them

fashioned from a birch twig

I dabbed white froth onto the lambs' coats

making it a Guernsey

a breed not likely to have grazed

the fields of Bethlehem

The long-eared donkey was painted gray

with a place on top

to hang the golden-haired angel

who flourished a banner proclaiming

I installed a music box

and a little light bulb

and bought a bag of sweet straw

For more than five decades now

a few weeks before Christmas

unwrapping the fragile figures from newspaper

and displaying them throughout the season.

When the children were young

Jesus wasn't placed in the manger

when we all gathered round

The angel now has a chipped wing

and the Guernsey's missing a horn

but Jesus still lies sweetly in His crib

apparently not minding whether or not

I managed to get every jot and tittle

of His manger scene historically correct

He just lies sweetly there

is a forever celebration

Poems about the Birth, Death & Resurrection of Jesus

is available online at Amazon, Barnes and Noble, CBD, etc.

Posted by Maude Carolan Pych at 12:37 AM

Email ThisBlogThis!Share to TwitterShare to FacebookShare to Pinterest
Labels: "My Treasured Nativity, "The Creche", Christmas poem, manger, Nativity set, the birth of Jesus