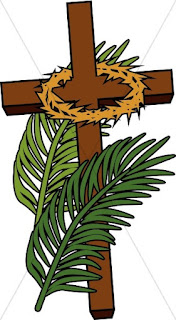 BETWEEN THE PALMS AND THE CROSS

upon that final week

wondering what happened to His followers

riding astride a donkey

as people spread their coats before Him

along the dusty road

Wondering about those followers

the ones who cut branches from palm trees

and waved them at Him in homage, proclaiming

Hosanna to the Son of David!

Hosanna in the highest!

After all, He was their humble King

between then and days later

when Jesus stood before Pilate

amid a crowd of onlookers

and everyone began shouting

Did they forget the taste of water

that He turned into wine?

Did they forget the healed lepers and the blind?

Did they forget Him preaching

to the multitudes, Blessed be the poor…

and the thousands He fed with a few loaves and fish

Did they forget He healed a pitiful demoniac

and the woman with an issue of blood

Could they have forgotten that he said to the dead girl,

Talitha kum, and she sprang right up and walked

And Lazarus? Could they possibly have forgotten

that Jesus called His friend out of the tomb

around his body…after three days!

how quickly they turned

to calling for His death

Wasn’t there one clear-headed believer

to boldly shout out in protest… 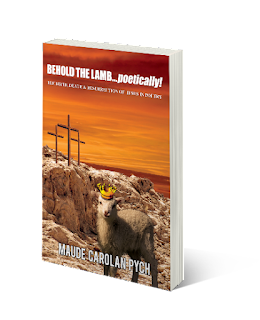 The book is available online at Amazon and Barnes & Noble.
Posted by Maude Carolan Pych at 11:30 AM

Email ThisBlogThis!Share to TwitterShare to FacebookShare to Pinterest
Labels: "'Between the Palms and the Cross", "After the Hosannas...", "The Crucifixion of Jesus", A Poem for Lent