I flip through the pages
and see Jesus handwritten in the margins
of the Old Testament, over and over
wherever I’ve discovered Him anew
and recall each exciting revelation

and imagine their amazement
as they listened to Jesus
revealing Himself as He spoke
about Moses and the Prophets
particularly when He came to the part
about the Suffering Servant in Isaiah 53
How exciting it had to have been to hear it
from the lips of the Suffering Servant, Himself—

Despised and forsaken
a man of sorrows, acquainted with grief
smitten of God and afflicted
pierced for our transgressions
crushed for our iniquities
by whose scourging we were healed

Who like a lamb was led to the slaughter
Who like a sheep, was silent before its shearers

I visualize the men
clutching their burning hearts

and as He broke their humble bread
they recognized Him

In that instant Jesus vanished!

so they rose from the table
and hurried off that very hour
all the way back to Jerusalem, in the dark
to tell the disciples of all the wonders
that happened that remarkable day

Note: The above poem appears in my new book (depicted below), "Behold the Lamb...poetically!" Elm Hill Press. It is available online at Amazon & Barnes & Noble. For information, go to http://maudespoems.com. 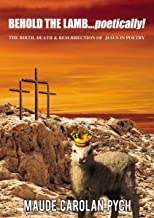 Posted by Maude Carolan Pych at 10:50 AM