A Poem for Father's Day

I've written about my father.

This one appears in "Wonderhoods," 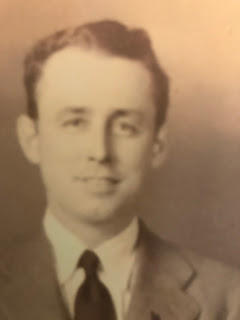 One of my earliest recollections

or maybe I'd heard the story so often

I just think I remember it

I was nearly four; my sister, two and a half

It was the day our baby brother

came home from the hospital

Frank, namesake of our father

was cradled in the arms of our mother

They arrived with Daddy and Gramma

through the back door of the stucco home

our parents built in West Paterson

Gram took one look toward the kitchen sink

and immediately a commotion started

Daddy had been taking care of Carol and me

while Mommy was in the hospital

(at least five days in those days)

and Daddy was definitely

not one to do "women's work"

Many times he went on

about Mr. Palmer, the man next door

with Dad, time to time

under the birch at the fence

Mr. Palmer not only helped

but sometimes he was seen

hanging laundry on their backyard clothesline

dressed in a smartly tailored suit

She was very unlike

the other house-dressed and aproned

Well, Daddy had to make the dinners

while Mommy was in the hospital

so he whipped up the only meal

he knew how to prepare—

He cut up frankfurters

and stirred them in a pot

He heated them until they were bubbly

and served them to us in bowls

as long as there were bowls

then cups, as long as there were cups

and all those pots, bowls, cups, and glasses

and every tea and tablespoon in the house

were stacked in the white porcelain sink

awaiting the homecoming of our mother

I don't remember who tackled the chore

Suppose it had to have been Gram

She told Carol and me not to touch him

so we just stood and studied him 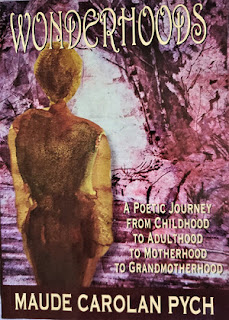 For information about how to order books of poetry