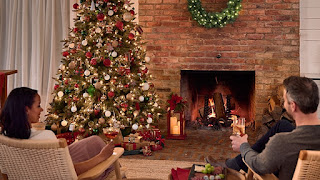 we caravanned each December

with the Mingerams, Leys and Shaws

to a tree farm in North Jersey

Our quest, the perfect tree

we trudged through snow

with rope and hand saws

in pursuit of a white or Scotch pine

till we agreed and tagged our selection

Then, usually Dad, but sometimes Mom

and occasionally one of the children

belly in the snow

to saw the trunk and bring it down

We dragged the fragrant conifer down the slope

hoisted it onto the car roof

where it suddenly appeared

Stopping for hot dogs on the way home

if the forest tied to our Volvo

were the municipal tree

We proudly set our trophy in a bucket of water

until the week before Christmas

to force it through the doorway

(one time breaking the jamb)

dragged it through the dining room

into the sunken living room

and lifted its grandeur into a heavy duty stand

Mom brought out platters of pigs in blankets,

and a punch bowl of frothy nog

of lights and tinsel and antique balls

made in Mom's ceramic classes

carefully wrapped in wads of tissue

There were gift ornaments, travel momentos

miniature nativities, a Star of David

fashioned out of painted Popsicle sticks

and popcorn and cranberry chains

strung by the children

Some brave soul would climb a ladder

and lean way, way over

to place the Lenox angel on tippy top

We'd flick a switch and oooooh at its magnificence

Throughout the holidays, as the great tree settled

so we could snip our way into the living room

Late at night after the children were in bed

Mom would sit in the dark

except for the twinkling tree lights

and gaze peacefully at the glitz and glitter

came the tedious task of taking the tree down

wrapping, boxing and putting away

There was always an amusing moment

in the midst of drudgery

when somewhere deep inside the branches

we'd come upon an empty Coors can

We'd wrap the tree in an old bed sheet

lug it to the curb

and spend the next eleven months

out of the shag

For information about ordering Maude's books:

Posted by Maude Carolan Pych at 12:11 AM